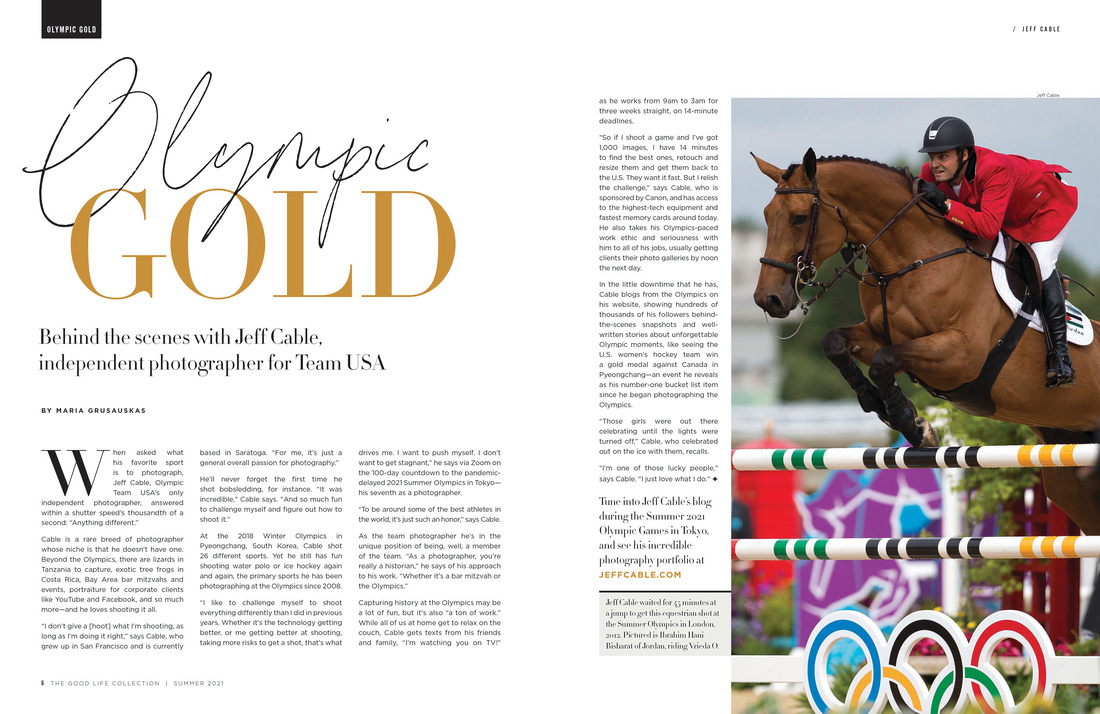 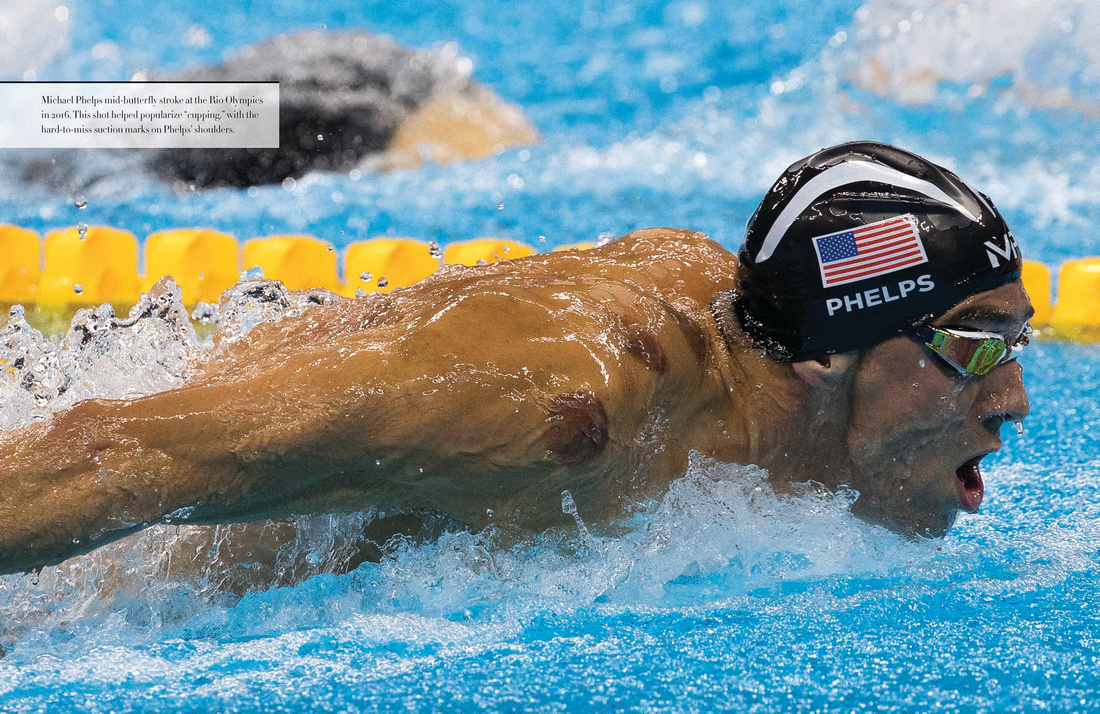 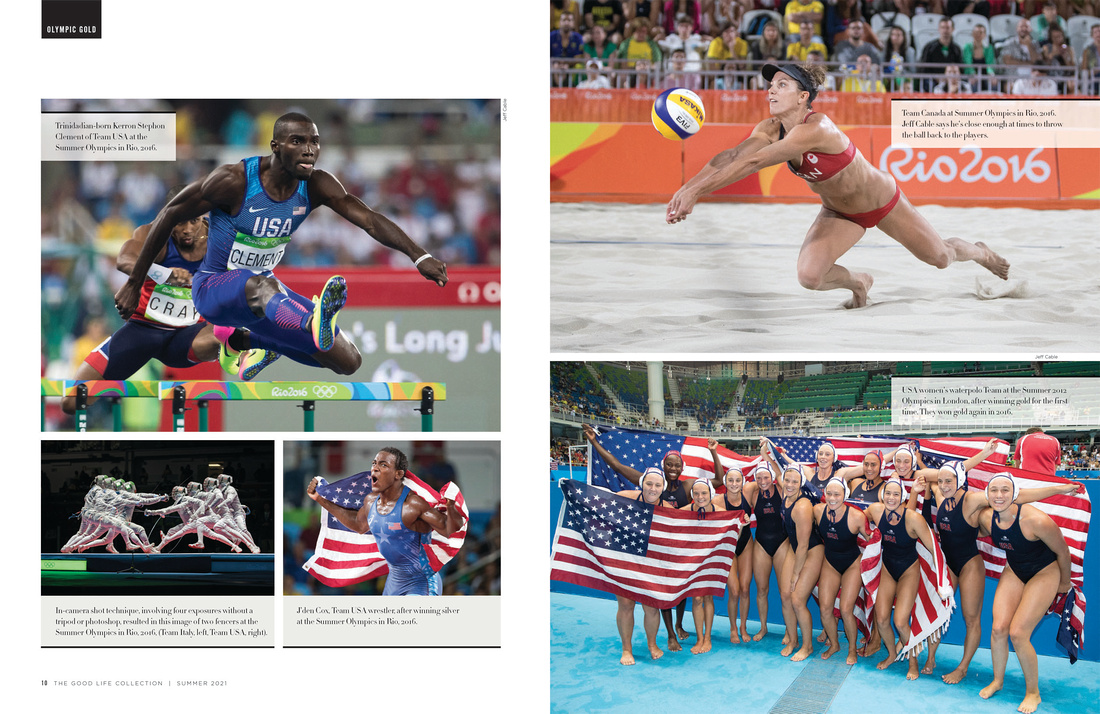 Behind the scenes with Jeff Cable, independent photographer for Team USA

When asked what his favorite sport is to photograph, Jeff Cable, Olympic Team USA’s only

independent photographer, answered within a shutter speed’s thousandth of a second: “Anything different.”

Cable is a rare breed of photographer whose niche is that he doesn't have one. Beyond the Olympics, there are lizards in Tanzania to capture, exotic tree frogs in Costa Rica, Bay Area bar mitzvahs and events, portraiture for corporate clients like YouTube and Facebook, and so much more—and he loves shooting it all.

“I don’t give a [hoot] what I’m shooting, as long as I’m doing it right,” says Cable, who grew up in San Francisco and is currently

based in Saratoga. “For me, it’s just a general overall passion for photography.”

He’ll never forget the first time he shot bobsledding, for instance. “It was incredible," Cable says. "And so much fun to challenge myself and figure out how to shoot it.”

At the 2018 Winter Olympics in Pyeongchang, South Korea, Cable shot 26 different sports. Yet he still has fun shooting water polo or ice hockey again and again, the primary sports he has been photographing at the Olympics since 2008.

“I like to challenge myself to shoot everything differently than I did in previous years. Whether it’s the technology getting better, or me getting better at shooting, taking more risks to get a shot, that’s what

drives me. I want to push myself. I don’t want to get stagnant,” he says via Zoom on the 100-day countdown to the pandemic- delayed 2021 Summer Olympics in Tokyo— his seventh as a photographer.

“To be around some of the best athletes in the world, it’s just such an honor,” says Cable.

As the team photographer he’s in the unique position of being, well, a member of the team. “As a photographer, you’re really a historian,” he says of his approach to his work. “Whether it’s a bar mitzvah or the Olympics.”

Capturing history at the Olympics may be a lot of fun, but it’s also “a ton of work.” While all of us at home get to relax on the couch, Cable gets texts from his friends and family, “I’m watching you on TV!”

as he works from 9am to 3am for three weeks straight, on 14-minute deadlines.

“So if I shoot a game and I’ve got 1,000 images, I have 14 minutes to find the best ones, retouch and resize them and get them back to the U.S. They want it fast. But I relish the challenge,” says Cable, who is sponsored by Canon, and has access to the highest-tech equipment and fastest memory cards around today. He also takes his Olympics-paced work ethic and seriousness with him to all of his jobs, usually getting clients their photo galleries by noon the next day.

In the little downtime that he has, Cable blogs from the Olympics on his website, showing hundreds of thousands of his followers behind- the-scenes snapshots and well- written stories about unforgettable Olympic moments, like seeing the U.S. women’s hockey team win a gold medal against Canada in Pyeongchang—an event he reveals as his number-one bucket list item since he began photographing the Olympics.

“Those girls were out there celebrating until the lights were turned off,” Cable, who celebrated out on the ice with them, recalls.